After many RL delays including stacked medical issues for myself, my partner, and friends, I’m back to give it a go as JustPete, the poster formerly known as Gandalf. Thank you!

There was a discussion some time back that I now cannot find where addressable netting was noted, both for sale and constructed.

I recall that the illustrious @jeff and @Scruffynerf contributed valued info. on sources and methods.

It would be great if we could resurrect that topic in some form, and thank you very much, as I am interested in looking into paralleling nets, perhaps 3 to 4 layers deep and seeing what transpires.

Cheers, and may it be a rejuvenating, refreshing and creative New Year!

So the premade netting seem quite expensive to me… The problem with build it yourself is the cheaply available bullet strings (which combined with cheap zipties and labor, you can quickly turn into nets) is the wire distance between pixels is usually too short.

Instructions are easy: you just ziptie each bullet to the midpoint of the wire of the next row

Look closely at a premade netting if that’s not clear.

Once built, mapping is pretty trivial (it’s a simple XY grid), and even adding a Z depending on how you drape it should be easy to figure out.

The hard part is finding cheap long wired bullets. Most are 4cm between pixels at most… You really 6 or even 8cm. If someone finds a good source, let us know.

@JustPete, I think the thread was this one.

@scruffynerf, don’t you mean 4 inch? Mine measure 10 to 12cm between bulbs, depending on whether you measure between the casing or the LEDs themselves, and I haven’t seen any other spacing from the usual sources (Banggood, AliExpress, Alibaba, etc). I suspect that the voltage drop for 5V and thin wires might be a limiting factor.

An addressable net, or mesh, or curtain, whatever – was what I was searching for initially before I made the fairy lights on vinyl display.

IMO the problem with the bullet ones is that it’s overkill for power and brightness. For a reasonably dense matrix or layered matrix it’s going to add up to a lot of power draw. The fairy lights are so appealing for this reason because they are smaller and draw way less power, but there’s nothing pre made. The sparkfun ones are too delicate IMO if you wanted to make your own. The knock off AliExpress ones are fixed address. So there’s a hole in the market for this.

The AliExpress ones can actually be good in one sense precisely because they do have fixed addresses; they can be cut into segments and then wired in parallel which simplifies some installations, but if you want to use more than 200 or so then you’ll need an output expander to give you a separate channel and address space for the additional strings.

If I remember correctly, @wizard’s 8x8x8 volumetric cube used one 8-way expander per row (so 8 in total), but with the AliExpress strings you could do the same cube with 3 channels of a single output expander.

My little 1.6 x 1m 4cm spaced sheet is 800 pixels. A curtain or net, especially with multiple layers is going to run you into the capacity of 200 per channel on the output expander pretty quick!

Sure, but you can stack 8 boards for 64 channels x 200 for 12,800 pixels. Though at that point maybe multiple PB or expanderverse would be the way to go.

Wow good to know, but what point do you figure processing would be the bottleneck? How many pixels per pixelblaze?

Lots of discussion on this in other posts. It really depends on the pattern and what level of FPS is acceptable.

Ws2812 has a fixed data rate, so you won’t be able to push tons of pixels with high frame rate on a single data line. 800Kbps, at 24 bits per pixel. 33k pixels a sec max. That’s like 16 FPS theoretical max if rendering was instantaneous.

There are multiple bottlenecks, processing is just one of them. On a v3, I think in most cases, if you go over 1000 pixels in untuned patterns, you’ll see some FPS drop purely from rendering time… Could be more or less, YMMV

Depends on the pattern, using the shipping patterns average is 48k pixels/sec.
Data rate of expander is 66k/sec.

Good FPS would need more than a solo PB for something like that.

How can you tell the Fairy lights on AliExpress have fixed addresses? The ones I have bought there are labeled as WS2812, for what that’s worth, and there are several versions available. Would it only show itself if you tried to attach a second string in series and it failed or as you suggested, cut one up and wire them in parallel, in which case they would work as expected?

The problem with build it yourself is the cheaply available bullet strings (which combined with cheap zipties and labor, you can quickly turn into nets)

… I have this perhaps irrational focus on something other than the bullet strings because I so much like the more linear arrangement found in Fairy Light strings. I’m just not so much a fan of the “jaggedy” aesthetic of bullet strings (reminds me too much of Christmas lights?) , though in a net the bullet could conceivably be arranged co-parallel with the conductor. That seems to be a basic hurdle that I might have to get over, dunno yet. As yet, I’m focusing on Fairy Light strings which does engender its own beautiful nest of issues.

I get the arrangement, thanks, have not built anything yet. But I’m also not so partial to zip ties for the above aesthetic reason. I know, picky, picky, picky. Again, dreaming of the fastenerless fastener. Let me know if you find one!

How can you tell the Fairy lights on AliExpress have fixed addresses?

The fixed address ones have the data on one of the outside wires. The pixels are a bit larger too.

@Booli, the fixed-address fairy lights are usually advertised as “SK6812”, they’re connected by 3 copper wires, and all of mine have come with the same packaging: 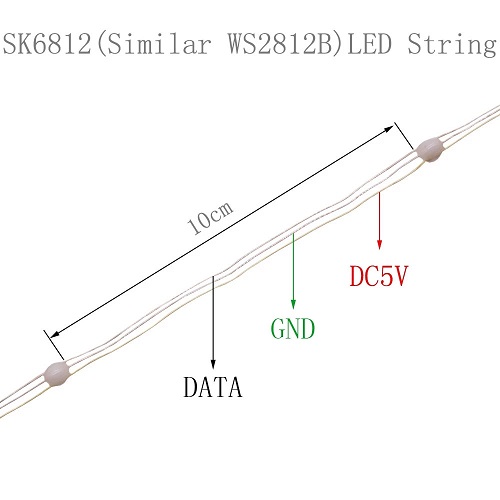 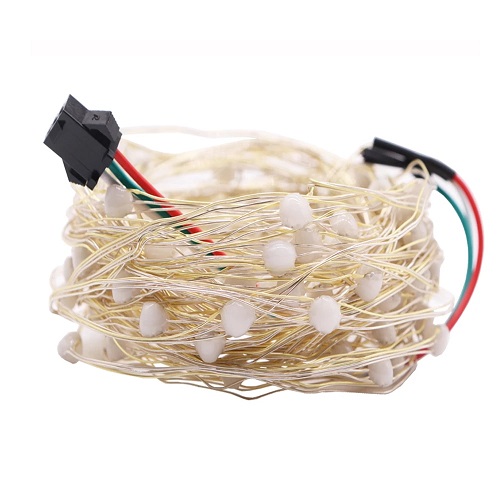 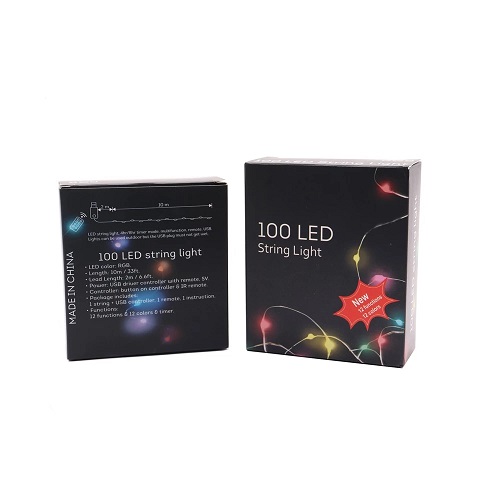 Two definitive ways to tell that they have fixed addresses are:

Signs that a fairy light string is NOT fixed address – that it follows the normal WS2812B addressing protocol – include:

…and returning to the subject of large-scale nets, I saw this on AliExpress: 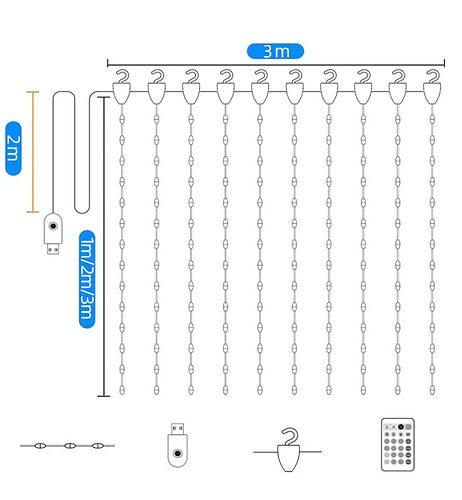 though I haven’t tried one yet. It’s not clear from the photos whether the vertical strands have sequential or parallel data paths, but even if they’re parallel that could be fixed by cutting the data wire at the top and jumpering across the bottom of alternating strands.

Thanks for all the great answers, folks! Really worthy, interesting and appreciated. In short, just a few notes -

@pixie you found the prior discussion of nets Nets Awesome!, and from the pics there I now see that bullets can be co-parallel with the wiring. Some tasty looking translucent shell (cubeoctahedron or higher poly shape perhaps?) might spice it up. @jeff 's reference to 10 x 30 nets from Ali Express Ali Express 300 LED Net shows them now at $240 including shipping. Worthy of consideration, but not “cheap” either. At the bottom of that listing page are several interesting arrays and net-like arrangements including Net-like Array and LED Array on Translucent Film.. This latter much like @gmcmicken filmed array Fairy Light Matrix on Clear Sheet, but his is better!

@gmcmicken, your matrix on a sheet is just really great. I love the whole approach… diffusion, effectively strain-relieving the strings, hot melt to clear sheet yielding wide angle viewing… that vinyl sheet though, did you see any puckering or melt behavior there? Could you reveal what type of sheet you used?

Finally, my fairly elementary observations about bottlenecks and such is that watching framerate behavior real-time is a great teacher and reality check for any given pattern/system combo. Multiple PBs and expansion boards can do a lot! Its not so difficult to wire this stuff up, as long as atention is paid to volts drop, and grounding grounding grounding That is IMO. Also there’s the alternative of running things from @zranger1’s ExpanderVerse, which opens up, well, yet another Verse.

ANd @Pixie thanks for running down the different Fairy Light strings. I have been running two types BrizLabs 200 LEd Fixed Address Strings and those 3-wire strings, where the data line hops back and forth. The former have much heavier wire then the latter. The 200 light strings seem to run fine without power injection, though there is some brightness drop.

@gmcmicken, your matrix on a sheet is just really great. I love the whole approach… diffusion, effectively strain-relieving the strings, hot melt to clear sheet yielding wide angle viewing… that vinyl sheet though, did you see any puckering or melt behavior there? Could you reveal what type of sheet you used?

Well first I looked on amazon for vinyl sheets and the reviews were all terrible so I had my wife look at the fabric store in town while she was there for something else. She said they had two thicknesses and bought me the thinner one. I almost guarantee this one (6mil?) from the fabric store is 10x better than the ones on amazon. It’s advertised to cover furniture, tables, etc. It did not melt, I didn’t have to be careful, and it didn’t pucker much at all. Though the glue is permanently bonded to the vinyl there’s absolutely no way to scrape it off now.

Thanks for the crystal clear clarification…I just went and check and I have versions of all of them, including 3 wire ones which I now suspect have fixed addresses.

returning to the subject of large-scale nets, I saw this on AliExpress:

This looks really good… and cheap! Someone please be the guinea pig!