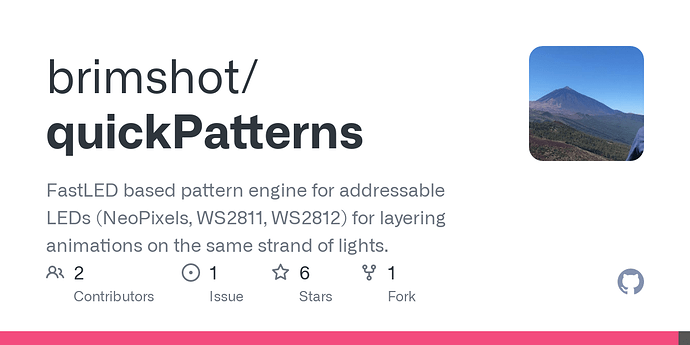 Uses FastLED to create a very systemic way of making patterns in combinations. Seems well thought out. It’s a very interesting approach, allowing you to make a pattern, and then layer another pattern on top, control changes based on a variety of timings. Porting something like this to PB would be nontrivial, but certainly doable.

+1 to this… also something like this would enable for DJ like transitions between patterns when going through playlists rather than abrupt changes.

Not really, unless you envision reinventing how the current playlists and PB works. This would be a single pattern with subpatterns, in a PB sense.

I don’t see or expect @wizard to modify how patterns works now or change how playlists work (load one, run for X seconds, load another, and so on).

The above approach is more “DJ” like, in that it’s a mixing approach, but it’s not a playlist approach.

would this be similar to the Crossfade function?

i admit its only a quick take - and there may be technical reasons why this wont work, i didn’t look too closely at the link, but in my head - if more than one depth of patterns is supported, then the playlist could be a anonymous top level pattern that incorporates the patterns in the playlist (which in turn have their own subpatterns), then crossfading or some sort of ease-in and ease-out would be a really nice feature to have when iterating through each pattern.

but again, i’m ignorant on the specifics and my intention here was just to ask the “would this be possible” kind of question.

I do plan on adding crossfade transitions and things like that. For that to work multiple patterns need to run simultaneously, and I have a bit of work to make that happen. When I do that, native multi segment support, and pattern layering/composition is also possible.