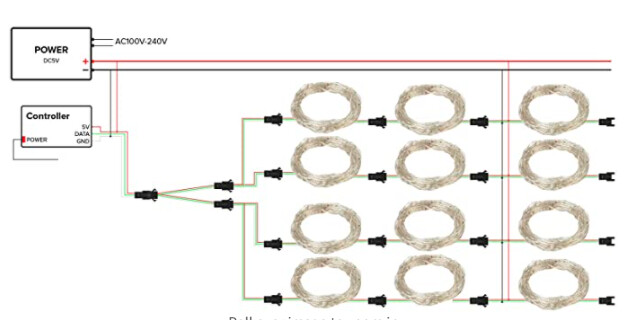 Question is, will this schematic work with Pixelblaze? And how many strings is it reasonable to run off each Pixelblaze? Looking at PB 3.0. I am interested in many parallel strings of from 100 to two hundred pixels each.

Thanks so much! And, greetings, since this is my first post here.

It will work. And forking the strands like that is just like running one strand: the data is mirrored not independent.

The “limits” of data are based on how many pixels are in series, not parallel.

If you want that many pixels to be all individually addressable, that is NOT the schematic.

If you want large scale, you add an expander which helps with the data distribution. See other posts on this forum about that.

That schematic shows 4 mirrored/duplicated strings, each that are 3 strings (50px) long, for 150px total from Pixelblaze’s perspective.

With an Output Expander as @Scruffynerf mentions, you can replace the splitters with 4 independent channels and get 4 addressable strings of 150px each, for 600px total.

Its good that they are also showing power injection! In either case, power is still important for the design, and you will want an external supply, it’s too much for USB. Also, it wouldn’t hurt to plan for another power injection point at the tail end if adding another string.

With strings in parallel, either V2 or V3 will be more than capable for 200 pixels.

With absolute respect and an interest in understanding, I am wondering where this statement about PB applies, and how -

I must be missing something! I really just for now want each string to have the same pattern.

OK. So now I see your comment, Scruffynerf, and thanks!

The “limits” of data are based on how many pixels are in series, not parallel. So, lots of mirrored parallel strings are possible, given adequate power injection. Correct?

Yep! Pixel data signals can be read by many strings at the same time. Each parallel path does not change how much calculation Pixelblaze has to do.

Means that a very, very long string can be used before you hit hard limits. Practically, the maximum you would design a system for will depend on the frame rate you want to achieve, and for some patterns the memory available. Calculating a huge number of pixels will be slow, and the animation frame rate will be low and won’t look as smooth/fluid and would only be suitable for slow fading patterns.

For your number of pixels, 200, you will not run in to any of these limits or issues, and would have good frame rates and be able to run any of the patterns you like.

Here are the rendering benchmarks listed on the product page which can help you estimate your FPS
(frames per second) capability. I would note that it will be slightly lower for WS2812 type LEDs, and the tests were done with APA102 type LEDs, but you can still use this to get an idea:

Using included patterns as a benchmark, Pixelblaze V2 can generate between 12,000-45,000 pixels per second.

From this data you can see that 200 pixels will give you very good frame rates on V2.

This is a topic I feel a little embarrassed about - I wish I remembered more of my undergrad for the fundamentals. But let me share a recent story that covers your situation and matches my experience as well:

My experience playing with splitting a signal between a couple of 200 LED strips was that there was enough level drop or interference introduced by a Y-cable splitter to cause intermittent weird behavior. (We’re pretty much at radio frequencies – does the Y cause reflections or standing waves that occasionally add up to data errors? If it’s not plain voltage drop, would a little filtering on each leg of the Y help?) Anyway, that project is returned to the queue for the moment, but I was think…

So you’ll want to google “'SPI splitters”. Note that most of these devices don’t spec their max bandwidth, so while most Neopixels and SPI or DMX splitters are good under 0.5Mbps, you might need a different type of splitter for APA102/SK9822/Dotstar.

This is ALL great stuff! Such good communication!
I’m wondering if the basic design of your Volumetric Cube could be extended with 64 strings say 50 to 100 pixels long… ?

Pixelblaze Volumetric Cube Firework nova (now on the pattern site!) Thread on the build To music: This is a volumetric LED cube made up of 64 x 8 pixel strings, run from a Pixelblaze V3 with 8 x 8 channel output expanders (for 64 outputs total), 512 LEDs in all, measuring about 2ft per side. 3D printed clips hold the LEDs in position with the wire, and provide some diffusion. The LED strings hang from a panel which also houses the electronics. A Sensor Expansion board provides th…

Last time I thought about this “sloshing about” of signals in electrical circuits it was in the strictly analogue world. This issue will be good to keep in mind as I dig deeper into this. Thanks for commenting!

We’ve answered my basic question, thanks, each channel can run a multitude of LEDs… so, with that info on frame-rate and pixel count I should be golden, this is great!

Wondering how parallel strings are treated in address/mapper-space…

I’m thinking of paralleling strings with pixels back to back for better spatial distribution of light.

If you mean forking the data line, so line 1 and line 2 share the data, that’s invisible to PB, and works fine. They will mirror each other exactly.