I’ve been making a bunch of sound reactive patterns for my pavilion, and while it works, I feel that a lot of them are not really as responsive as I’d like them to be. I’m stuck between either way too much reactivity or very little at all. Tuning various parameters helps, but I still feel that I’m not really getting as much oomph as I’d like.

meansound approaches the average level of maxFrequencyMagnitude, and then peaksound is the instantaneous ratio of maxFrequencyMagnitude to the average level. My patterns typically run at 15-20 fps, and peaksound is peaky, but I just don’t get an exciting enough reaction. Does anyone have any good tips on what to do? Maybe I need to scale peaksound in a non linear way, or have some kind of persistence to it greater than a single pass through a loop?

Hey! Have you been using the example PI controller in your patterns? I tried to document it more verbosely here, and I believe that version shipped on the v3 if that’s more convenient for you.

Yeah, initially I used that but I went away from it for a few reasons

for example here is a pattern i’m working on 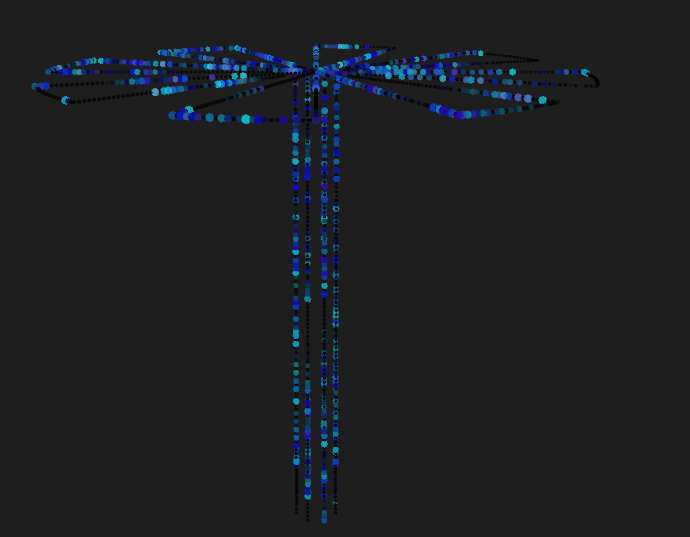 There are a number of drops that move around the upper portion and then fall down the center portion. The drops might change their hue/saturation/speed as a function of sound intensity, but the total brightness is mostly fixed.

The soundavg function I posted above has a couple of aspects I like.

Using this allows my to adjust things like speed and color which are not really coupled to brightness. My issue really seems to be that I’m not getting enough contrast on my sound output. I definitely get some, but I want it to kick more.

Maybe I should replace
peaksound=clamp(insound/meansound,0.1,5)

so that I only return values when the sound is above average. But I’m also wondering if anyone has an understanding of how energyAverage and maxFrequencyMagnitude tend to behave with respect to music. How peaky can they be compared to their average values, and what is the best way of making them stand out?

It depends on music genre of course, but for picking out rapid changes, maybe a moving average of energyAverage over 10 or so frames would provide better contrast with maxFrequencyMagnitude?

Also, you could try picking a specific frequency region and looking at its contribution to overall amplitude.

In general, average amplitude will be more constant than you’d expect, and local peak amplitude might not be that much greater than average because of compression, and also the volume normalization performed by all the online music services.

There are lots of marketplace incentives for engineers to make sure their tracks are at least as loud as the next guy, with the result that the average level of recordings has converged very tightly on a near constant 0db.