My first original (as far as I am aware) build! It was an absolute pain to assemble and there are a lot of things I would do differently if I did it again but it turned out descent.

I am just beginning to learn PB Java so the patterns are all from the community aside from the last one. Thanks for an awesome controller and baffling code patterns! 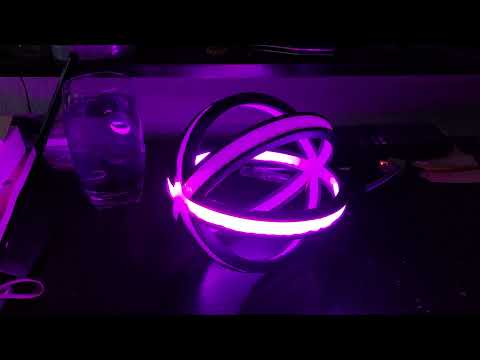 Did you map this? With LEDs on both sides are they independent or connected? 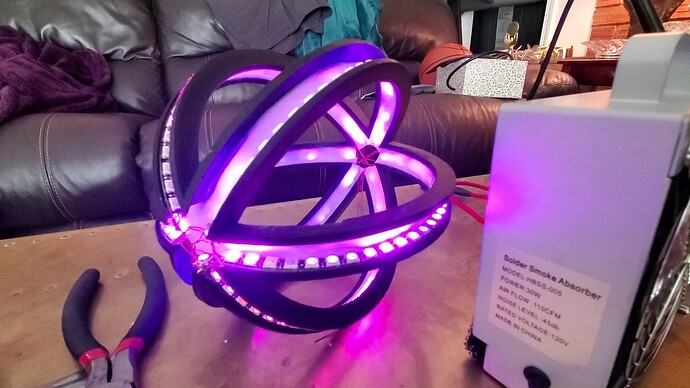 That should be pretty simple to map in 3D, it’s 3 rings, with an axial rotation applied to 2 of them relative to the first.

So if you consider the first ring alone, take the 2D example map, which generates X and Y coordinates, and add a flat Zero for Z (so we’re defining Z as up/down here) since no height for any of those pixels, right?

Then it’s a matter of calculating the other two rings where the Z changes, and since it’s symmetrical, one is the opposite of the other…

Just like with X and Y, Z will vary with the sin or cos of the angle (I haven’t done the math, so I’m not sure which to use), so if the 2nd ring Z is sin(angle), then the 3rd ring would be -sin(angle)

Sorry, don’t have time to work out the whole map (plus unsure how much pixels in a ring or what the wiring is, what angles have no lights, etc), but hopefully that’ll jumpstart you.

If you just want to make it 2D, just use code for 3 flat rings in a row in your map, and that’ll be half your battle anyway, then you can improve for 3D.

Thanks! That will put me at a good start