Im using 2 meanwell 12v LRS-350 power supplys. I was wondering if anyone has an advice about running these in parallel just in case one fails.

The internet suggests in general this is tricky but i know theres a lot of experience on this board. Does anyone do this for redudancy or does it just make things more complex ?

If i do run them in parallel what actually is the diode component i need to add to stop them frying each other ?

know replies might be slow as guessing everyone is probably at BM ! 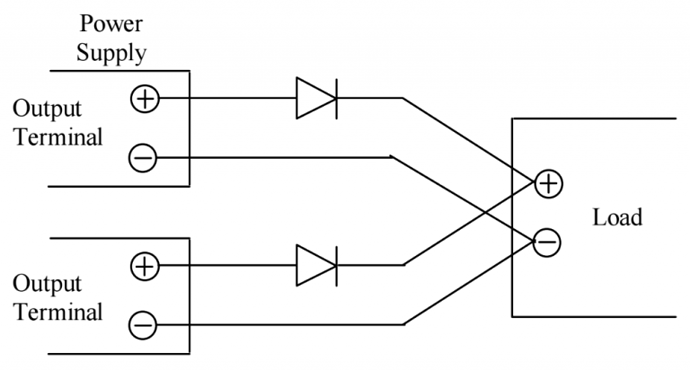 Using diodes this way is a quick solution for power supply redundancy in a low current application. It will theoretically work for higher currents, but the diodes will need to dissipate quite a bit of power. A better circuit design will use MOSFETs, and lo and behold, Meanwell already makes a module for this purpose. ERDN40-MEAN WELL Switching Power Supply Manufacturer

I think Irwin’s response is on-the-money, but I also wanted to add how unlikely it is for a MEAN WELL to fail, and some single-supply options that might be simpler than failover, especially if the conditions that cause PS1 to fail are also applied to PS2.

The LRS-350 datasheet gives the minimum MTBF (Mean Time Before Failure) at 2100 K hours, IE 240 years, and that feels ridiculous. When MTBF is based on warrantee return data, it’s interesting; when it’s based on the minimum of all critical subcomponent MTBFs or even the correct statistical union of them, I’m skeptical.

That said, I worked with a seasoned art car veteran this year who told me that despite the alkaline dust, vibration, and rain, he’s never seen an uncovered LRS-350 fail in the desert. He said the fans can definitely seize up if you don’t blow them out with compressed air after every year, but he reports it’s surprisingly unlikely to have a failure.

If you’re installing something for a multiple-year outdoor installation where accessing the power supply for replacement is untenable, consider selecting something from Mean Well’s Harsh Environment series: In 12V and higher, these are HEP-, such as the HEP-320-XX. On a budget, my 12V / 300W waterproof supply from Ray Wu is still going well after 2 years outdoors in mild-yet-foggy San Francisco.

In 5V, the “High Reliability” HRP series (HRP-300-5) is a little sturdier, and remember that the ones 200W and under don’t have fans (which is good for longevity in some environments). The HSP-300-5 is also pretty nice: Conformal coated (which honestly looked more like epoxy to me), fanless, but note that you really need to bolt it to a decent piece of aluminum or copper for heat dissipation.

if you don’t blow them out with compressed air

BTW I’ve seen this kill fans by spinning them too fast (especially if you are using a shop compressor), use short bursts!

Thanks everyone for all the insight.

Bascially i dont need to worry i will just run some lights from one PSU and some from the other. ERDN40- looks smart but is basiscally same price as the PSU in europe !

Thats cool to have the insight about BM you would think they would get destroyed. Is the LRS-350 the most common PSU for 12v projects ? You would need so many !

I’d say so! (of those who choose to use MEAN WELLs). A real-world measurement of max-current on my 12V LEDs yielded 11mA max draw. That means a single LRS-350-12 can handle 29 A / .011 = 2636 LEDs at maximum white, assuming proper power injection. I also learned most large projects use a variety of assumptions and software safeguards where you can easily double that number of LEDs if you’ve thought through all conditions and set reasonable limits.

The RSP series is similar to LRS series but includes power factor correction, which was important for me on a recent project where I used a lot of them.

I also recently learned Mornsun power supplies have a good reputation and are about 20% cheaper, while being very similar (specs, holes, size) to their MEAN WELL analogs.

Great advice here all around. I’ll also just mention this: if you’re using any power supply in an environment with high ambient temperatures, be sure to check the temperature derating curve in the spec sheet.

This is all so relevant to my project. I did all my calcs based on the specs and when i actually got all the stuff i feel like im so over spec’ed in terms of PSU and wire gauges.

Also will checkout mornsun thanks