I have 2 pixel blazes each hooked up to 150 WS281X LED strands. I added a firestorm on a pi so I could sync both panels.

These all join my home wifi network, and play fine. Sometimes I accidentally reboot the pi running firestorm and the panels will get out of sync, fine. But I assumed without the pi they would just default to playing their patterns.

However, I gave these two panels (without the firestorm pi) to a DJ for a live stream, and when he plugs them in at home only the first few LEDs come on (red and then white) then it freezes up. I usually see those LEDs come on first (no idea why) and then it goes into playing patterns, but now it’s just stuck as below.

Link to video of panels for reference: 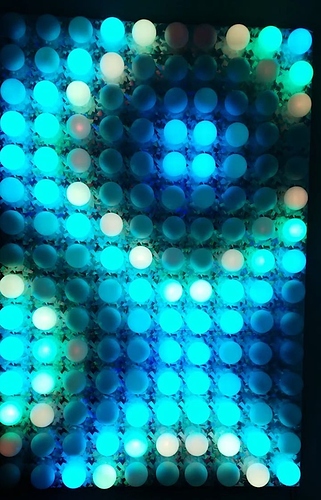 Sun and Moon Couture on Instagram: “These are just some test boxes I set up...

11 Likes, 1 Comments - Sun and Moon Couture (@sunandmooncouture) on Instagram: “These are just some test boxes I set up at home to use as displays for testing and programming…”

I think it may be related to his home wifi network being a problem, and asked him to power it down to troubleshoot, but that’s not going to work for him to live stream from his house.

I considered grounding GPIO-0 to ground, but can’t remember if that resets it to play patterns or locks it in bootloader mode.

I’m not there to troubleshoot or reconfigure things, so I’m hoping we can find something simple to resolve the issue.

OK, for troubleshooting, what I suspect is that they are trying to connect to your home network still, and then failing back to setup mode. That would explain why they aren’t running patterns when moved from a working setup.

WS281X will pick up anything, and don’t have a way to validate a signal, so they will display random noise and glitches before PB boots and can start sending them real pixel data. That they are stuck, just means PB isn’t running normally, probably stuck trying to connect to WiFi. Usually that takes less than a second.

Right now to run them without WiFi means setting them as AP mode, which is mutually exclusive to getting Firestorm running, and switching back and forth means going back into setup mode.

For this setup, I’d recommend a small cheap wifi router. I’ve used this model for portable setups, its cheap, and low power enough it can run on a USB battery pack:

It’s a bit of a hack, but you can set it up with the same SSID and password as another network to use when these are remote, then just turn it off when they come home. You can also pair it up with the Pi as a remote Firestorm network.

The Pi itself can also fill in as the network if setup in soft AP mode. It’s a bit more work to configure, but could save on hardware/power.

Hi Ben, Thank you for the quick reply!

So, they are trying to get this working for a live stream tonight, what’s the easiest way for them to get the patterns running again? he doesn’t have the firestorm pi, so we don’t need them to sync just the default pattern sequencer.

If they short gp0 -> gnd it would enter setup mode, and they’d need to join the pb network and configure it for AP mode to get the patterns running again. However, one of the PBs is pretty stuck inside the panel encloser and they won’t have access to the pins. Any thing else that they can do? Are you saying that one is already in setup mode so they don’t need to short the pins, just enable AP mode?

Is there any way to update the behavior so that if it doesn’t find the home wifi network it just defaults to playing patterns? Won’t help with today but it might for future uses. I guess I should have put each PB in AP mode before I gave them to him. Didn’t realize this was the designed behavior.

If I’m right in guessing what is happening, then they are in setup mode, so no button required for this part.

Power them on, wait a minute, then see if they are showing up with their setup WiFi networks (Pixelblaze_xxxxxx). If so, then they are stuck in setup mode, and can be switched over to AP mode for tonight. Just be sure they give them a unique name and a password of at least 8 characters.

However, once in AP mode they will stay there, and you’ll need to get to the button/pins to go back to setup mode.

Yes, fixing this has been one of the goals for the next version!