Hey all! I’m wondering if anyone in this community has experimented with outdoor light installations that hide the LEDs and, rather than reflecting the light off of a solid surface like a wall or a plant, reflects the light off of something that’s temporary, recurring, or emergent. I’m particularly inspired right now by the work of James Tapscott, who makes landscape art installations that use light and mist. I find them totally captivating.

Has anyone out there done similar work with mist, steam, fog, or anything along these lines? Im curious to learn from your experience! 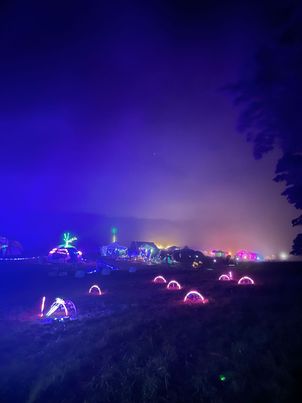 It wasn’t on purpose but here are a bunch of different LED projects from Transformus in West Virginia last summer!

I’ve played around with a humidifier and lasers with some success, also a home made smoke machine (vape unit + fish tank air pump) with LEDs that also worked quite well, albeit on a pretty small scale and in short bursts.

I have in the past installed LED RGB strips behind a water curtain that then went into a swimming pool. Looked pretty cool at night. The strip was installed just under the curtain nozzle, if that makes sense. On the same install the client had three water spouts dropping into a pond, and I lit those from the bottom. So each spout hit the centre of the colour change underwater spot. The only thing was that the pond had to have a certain amount of water in it to get the right effect. Too much water and the effect didn’t work as well and not enough water the water spouts wouldn’t glow.

Thanks for sharing these examples and links, all! I’m going to continue my tinkering this winter, and I’ll post an update if/when I have something that’s share-worthy!

Hi there! projected light is something I’ve done a couple of projects some more temporary than others using a Fresnel lenses. still learning and experimenting with different focal lengths and sizes types. working on the v3 version now.

What produced the absolute best results for me was v1 prototype:
a ~9" diameter 256 round LED panel with a ~9" diameter round Fresnel collecting lens separated by a crystal/glass vase that happened to be just about the right focal length.
the vase was actually a little short on the focal length by an inch or so which made the lights slightly out of focus (diffused) and everything transmitted through the vase also contained some diffused fractal patterns.
Due to the construction not a great way to see how it works other than vertical. but Works perfect from ‘table top’ (or floor) to ‘ceiling’ to put in perspective.
problem with the v1 version is its just not portable or really any way to adjust the “aim” (ive thought about stuffing it all in a large round cylinder but would need to build some kind of brace holder for the vase that would disturb the light - something clear cast acrylic just never got to the top of the idea pile)

v2 was one of the three leg tripod ‘studio light’ (donor light / furniture picked up from ebay) replaced the internal (standard a26 light) with a 256 matrix going through a ~6" Fresnel lens (much shorter focal length) s replacing the cheap glass diffuser that came in the light. Works pretty good to project on a wall from a < 10" distance , covering a 15x15 or larger size on the wall, depending on the angle. i find it works better close to the wall , like a wash, than projecting across the room. across the room the leds are not all that diffused and looks like a distorted matrix on the wall. the distortion is due to the alignment of the light the lens and the surface being projected on. Coupled with the shorter focal length. It needs the skew adjustment feature of modern projectors have. it also needs a focusing mechanism. someday soon will collect the pictures and describe it better.

Learning: the skew adjstment and focus mechanism needs to be more advanced. I just used friction fit on the LED matrix and the Fresnel lense which requires a lot of opening / closing of the light to make minor tweaks depending on where / how you use the light.

v3 things to solve , better way to adjust the skew/focus of the light to the lense better way to adjust distance between the light and the lense. so far v1 and v2 have had a fixed distance - but think this needs to be more variable to produce the best result depending on how the light is being projected. (how far away, what the surface is, what you intend the effect to be)

i have used the v2 studio light to project up and through a window and sort of noticeably illuminate the trees outside with the patterns but they are too far distance wise for the lens used (focal length , diameter) and not enough light intensity to be super cool, because its so washed out and TOO diffused but it kind of makes the trees dance a little.