Hi, I’m working on 2 projects that I’m having some difficulty with, I’ll start with the easier one…

I’m trying to create a polygon shaped matrix, each side 200mm long, making length 350mm ish and width 350mm.
I would like the patterns to begin in the centre, any advice on how to tackle this? 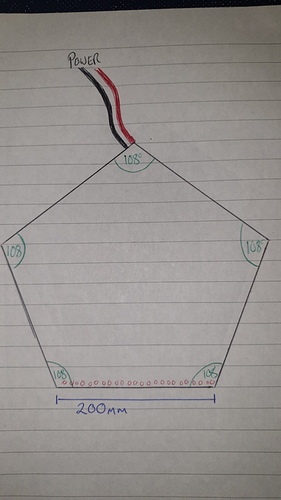 The second project is a dodecahedron with LED strips running along all the edges and meeting at the corners.
(Split into 2 separate runs/channels of LEDs)
Only 2 LEDs can be joined as there is very little room to solder… but the data cables can be backtracked underneath the led strips. 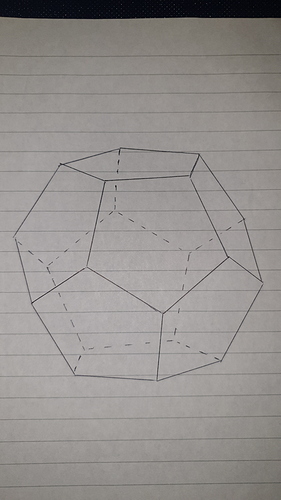 Any help would be greatly appreciated as I just can’t figure it out after a lot of head scratching!

I’d love to help but don’t know exactly where you’re stuck. Could you write a little more about what kind of questions you’re struggling with? Is it just generating the actual coordinates to make the maps, or the pattern code, or are you trying to determine how to wire things up and which LEDs to pick?

For the first project, have you settled on which strips you’ll be using, and thus know the pixel pitch (spacing)? You could wire up concentric pentagons which would have nice edges, but might be a lot more soldering. You could also pick a flexible strip to zig-zag rows top to bottom, either occluding the LEDs on the bends, or pick a strip that can be cut every pixel (like the SK9822’s sold on the Electromage store) and solder each row to the next with a 4-wire jumper.

If you’re looking for how to wire the edges of the dodecahedron, I would just make a physical model and play with it (maybe draw on one with dry erase markers) to figure it out. For mapping them in space, just FYI I’ve seen a few dodecahedron projects on the LEDs Are Awesome facebook group, and I believe at least one of them is using Pixelblaze - maybe they’d be up for sharing their map generator if you reached out, and I bet they’d have tips on how to wire edges.

Hope this helped in some way!