No code yet, but want to record this so I build it later.

JavaScript tangram generators exist. All of the shapes in a tangram are triangle derived and a simple 3 dots in an L shape is a minimal triangle in LEDs. The solid square example in tangrams if done with the small triangle as 6 LEDs (2 minimal triangles, back to back), fits into just 8x8…so a 16x16 has enough room for most randomized tangrams. So a tangram art generator should be a nice pattern. Different colors distinguish each shape. Alternatively, the minimal triangle is 3 on a side, making the square solution 12x12… Still works, but some larger puzzles/combos won’t fit in 16x16. Middle ground would be 2.5 LEDs in minimal, which works because the smallest tile triangle would have a base of 5 LEDs, and be 3 tall, and the square solution would be 10x10. 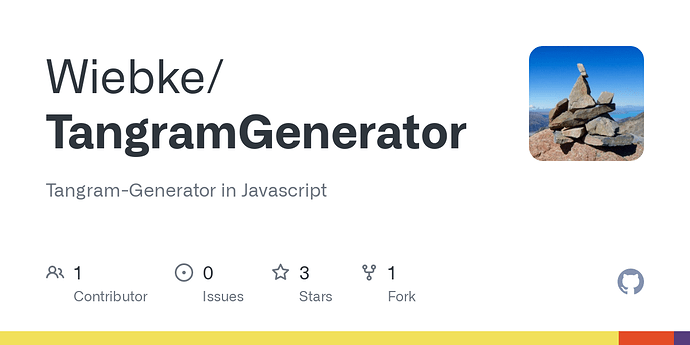 Tangram-Generator in Javascript. Contribute to Wiebke/TangramGenerator development by creating an account on GitHub.