What cool things are people planning on making?

I know this group is more for what you are actually building now… but I thought it might be fun to share what fun projects people are planning on working on and any links to how it’s done. I mean who doesn’t like adding to their project lists! 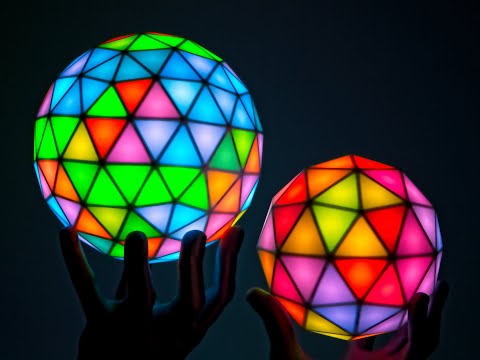 I plan on modifying the build to run the power lines down inside the hand.

Heh, my list is so long I started an entire thread on it

But I am waiting for some deliveries…
I literally just went to check on an Amazon order and noticed they’d added a bigger discount than the one I’m getting tomorrow, so I grabbed a second one ($30) 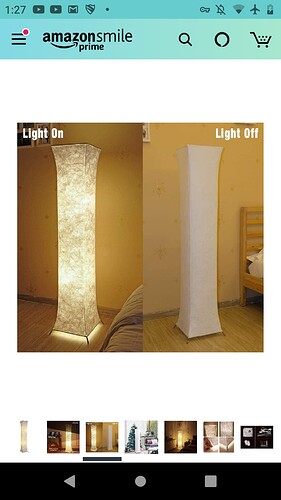 So this arrived today, and I threw a temporary set of lights into it, actually a few attempts (first a 150 strand wrapped around a cardboard tube, then a 300 strand wrapped around a pool noodle). A quick map based on Cylinder pixel map and I had something interesting, but of course… few patterns that ‘did it right’. Since I have plans for a handful of these ‘lamps’, I’ll likely be adjusting patterns to work well with it.

One thing to decide: what’s Z? I did Z as height , but now I’m rethinking this, as I suspect many patterns would look better if it was Y as height. To be played with more…

Added: I added some boundary pixels, adding ‘far corners’ for X and Z, to make the cylinder ‘taller’, which helped, and then I realized that’s MAYBE not the right way, maybe I should be transforming, by adjusting the scale (since it’s a narrow but tall shape), so my Y should just be scaled up… Otherwise the corners bring the relative X and Z in closer (since the overall 0…1 remains, but then the X and Z are in tight) More to be played with. One way the map handles it, patterns don’t need to care, the other way the patterns have to be aware of the weird shape (not a square/cube) This will be fun. Ultimately, it’ll be a good way to see how far I can push some patterns to work in 3D and be interesting.

I plan to add transforms to the global map, so that you can fix the aspect ratio outside of pattern code. And would help with assembling multi PB maps. Fake pixels get it done for now tho.

My project was for the Colorado burning man festival, called Apogaea, that normally happens every June, except its been cancelled this year and last year. The theme of the event was “Portals” so I started working on an LED portal that is 7 feet high and 16 feet long that people could walk through. Its going to be a cylinder with the LEDs (with ping pong balls glued to them to increase visibility) on the inside of the cylinder. 8 hoops with 64 LEDs on each, with a gap at the bottom for the walkway.

I am hoping the event does not get cancelled next June so I can get this thing fully built and running at the event. I am building part of it in my living room but still working out the structure since it has to be able to be transported in a car and then assembled at the event.

I’ve simulated it with PixelTeleporter so I can see what it may look like and have attached a GIF of a program running on the PixelBlaze.

It will be great to see it up and running next year barring another cancellation of the event.
The event has so many LED installations, its so much fun to walk around the 2 mile long event area, and go up on the hills and look from above. Takes 2 or 3 nights just to see everything, some are interactive and fun to play with,

Around a styrofoam sphere about 9” in diameter.

Just trying to figure out how to secure the strip around the sphere a bit more securely than masking tape I used for a mock-up.
Am thinking of using pins to build a spiral railing around the sphere and just reset the strip on the pins.
Not super robust but probably OK as long as it’s not disturbed.

Hot glue? Or some type of double sided tape?
The styrofoam is the tricky part, you’ll want something that binds with it.

Rather than hotglue I’d suggest trying something like E6000 glue, I’ve found that (or E8000 etc which all seem pretty similar) sticks just about anything. If possible try and get a tube that has a fine metal nozzle like this, it makes it much easier to work with.

Do a test on the styrofoam first. E6000 has a tendency to soften some types of styrofoam. 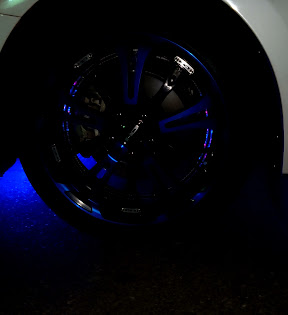 I found 2” T-pins which I use to rest/attach the LED strip to the styrofoam. It not permanent (that’s a plus) but seems to be holding. 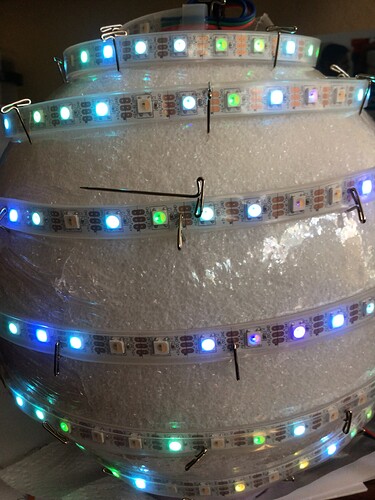 Very entry level but looks great from a distance.

Will try to get a more atmospheric photo when it’s dark.

This is the Amazon description:

Too many in progress at the same time.

@Scruffynerf Are you going to use rgbw leds in this? It might be cool to be able to get real white plus some color. Even making two bright spots where the bulbs would normally be and move them closer and farther apart nice and slow would be a cool mellow effect.

Not for these first ones at least, I went with 60/m (so 300 over 5 meters), and it’s certainly not closely packed, but doing too many colors in close proximity (since it’s heavily diffused) already yields too much ‘white’. I have 2 others (different models of lamp, but basically same thing), and I might try that with one of those.

Fireflies looks awesome, but time flies 2D are a bit too abrupt (needs smoothing), for one of many examples.

The Lava Lamp thread inspired a couple of experiments. 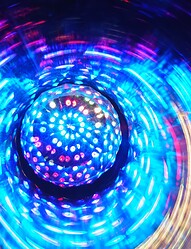 A PB powered lava lamp, though its hard to get it to consume enough power using the Fibonacci 32 mini… at first i though it was the USB port but after hooking up a 70W supply directly still only get about 2W on average (.3 A) max of about 2A (12W). So not a lot of thermal movement, but this has a bunch of glitter that moves around a bit easier compared to the original lava lamp blobs, so this works OK but not sure this would be enough heat for the old stuff.

So here’s an update to my entry level project.

I just experiment with pattern making today for the first time. So easy. Awesome that code updates take effect immediately.

You’ll have to use your imagination a bit but this supposed to be a jack-o-lantern where the eyes, nose, and mouth light up gradually.

The lights are not dense enough but hopefully you get the idea.

Can’t get video to upload so here’s a couple photos. 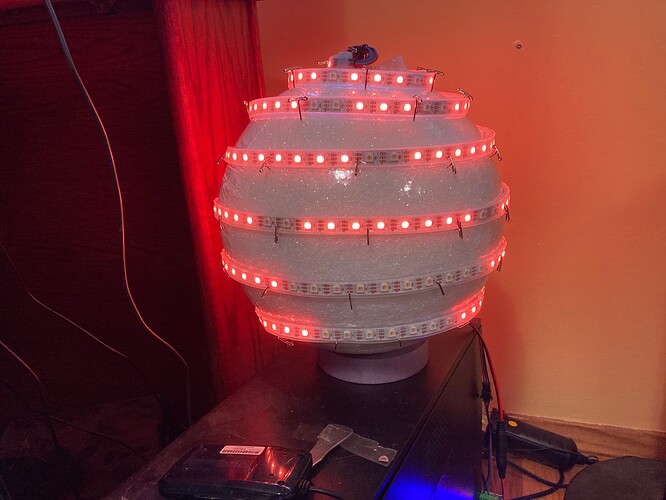 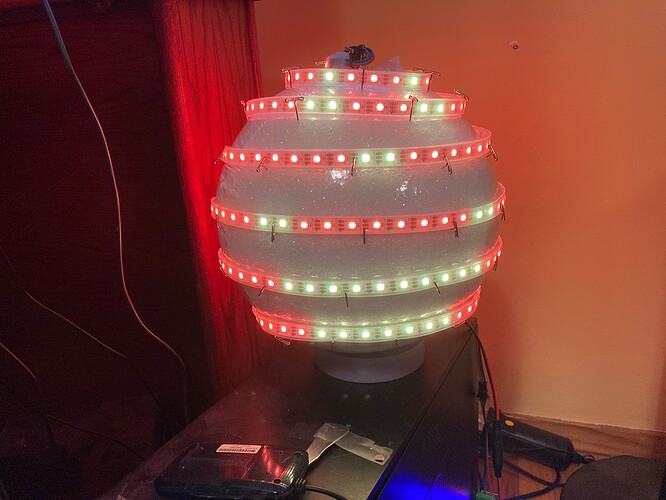 Here’s my take on a 21st Century Lava Lamp…just slow those pixels down!!

I wanted to post videos…I suppose I have to upload them somewhere else and just post the link here? I’ll catch on eventually. Till then you’ll just have to imagine these lights running your favorite PB program. 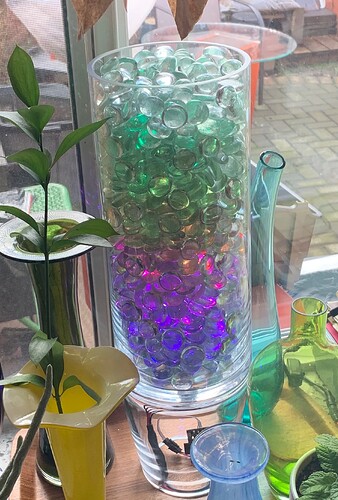 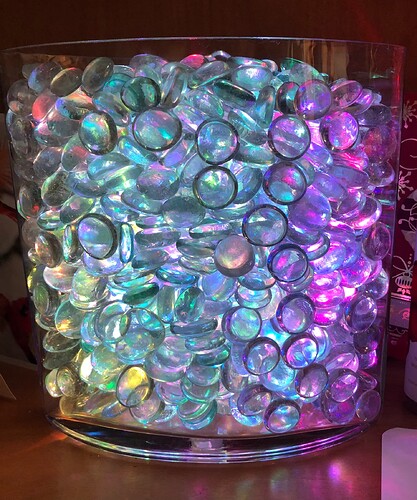 Nice! Is it a strip or a ring?

I was thinking of putting a ring at the bottom of a bowl filled with glass marbles – so many LEDs, so little time…

Pixie:
Nice! Is it a strip or a ring?

The cylinder shaped one above is an PVC armature wound with a LED strip.

Bowls are quite beautiful as well. If the bowl is clear, you can even just place the ring under the bowl and avoid having to drill a hole in there glass. Here’s a square bowl I did.; the wire is just looped up over the edge on that one. 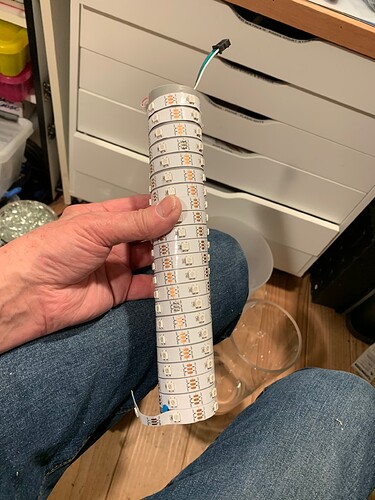 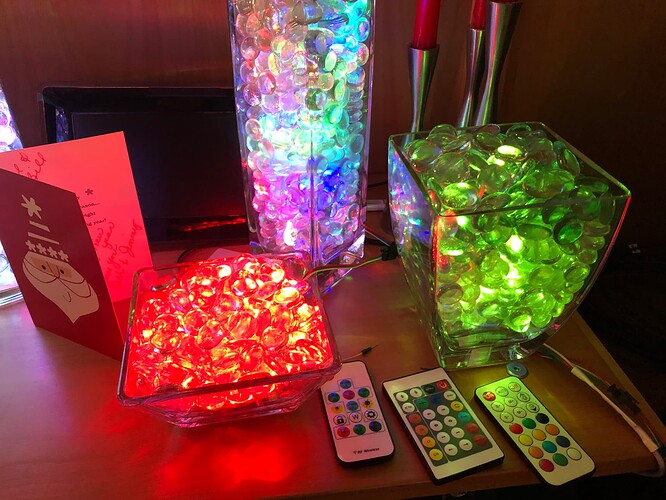 WOW, that is simple and yet so amazing. That is only meant as a compliment.
I wonder if you could get the square “bowl” to look like hot coals from a fire. I really want to try some of this. My wife will probably kill me because with the PB being so “simple to program” I would constantly be playing with new and different patterns.

I would love to see what “pacifica”(the Dan Garcia tribute) would look like on the tall cylinder.