A while back I was having problems with fried LEDs and then disappearing code. Not sure why but it would be great to understand more.

The situation - Multiples of addressable Fairy Lights, up to 800 in a single series string, describing a random-ish crisscrossed pattern in 3D; well-balanced injection; and “pretty good” ( I don’t exactly remember) attention to grounding. But I may have missed something.

While running a patterns on the PB3, the pattern would go all wonkers, colors, pattern and brightness off the map, trending toward blue-white. Then strings would burn out, at least downstream of a single point LED. Costly in time and materials.

One event fried most of the string and somehow deleted the code I was running from the PB, as well as another pattern I had loaded but was not running at the time.

Another event, I was showing the string array to a friend reached out toward an LED and voilla static discharge to the LED across about an inch of free space. this promptly set that LED to buzzing then bursting into flames. Yeah, flaming plastic LEDs… not so much a desirable situation.

I have moved on to max string lengths of 200 px; am rigorous about grounding the crap out of everything; and running dual power supplies https://smile.amazon.com/gp/product/B01HJA3OUG/ref=ppx_yo_dt_b_search_asin_title?ie=UTF8&psc=1 carefully tuned to same voltage…

Question is: How does this happen?
Static/bad grounding?
Array acting as an antenna?
Quantum fluctuations in the weave of space-time?
Well… seriously now, it would be great to understand this better. I’d like to feel that one can build stable systems with components in hand. Any comments or insights would be greatly appreciated. Thanks!

Those wires aren’t well grounded in general… They are open ended at both ends of each pixel, so a spark can happen, for example. I’m sorry to hear about the troubles.

It OK. I’ve learned to not reach in while operating the matrix, and have rewired everything with full attention to grounding, in particular. These issues are why I am going to either find another product, order something custom ( 1/2 the spacing, larger “lenses”, no bare wire ends and etc.) or modify this product to suit for now.

Am still curious as to how this feedback can delete code from the PB, but I suppose all kinds of magic can happen…

Its all been fun in retrospect.

You don’t by chance have the +5V sides of the two power supplies connected, do you? I’m assuming everything has a common ground, but you’ve divided your serial run into two sections when it comes to the positive side of the power supplies.

The fire… I just… I just wish I was there to bear witness.

Regarding deleted code: Not saying this is what happened to you, but I’ve experienced a couple times where what actually happened was that the WiFi connection to the Pixelblaze was spotty or went out while I was hacking on some huge pattern. Sometimes my huge pattern was making the board reboot; typing new code would restart the pattern so I thought everything was live and all good, but then my click on “Save” must’ve happened in the middle of a reboot or bad wifi, so I lost entire patterns or lots of work. There’s not a great confirmation in the IDE that a pattern has successfully saved. In addition, rarely I’ll find I’m in a state where previews will not generate, and so you can’t actually hit save. It’s now become almost muscle memory that after a lot of work, I copy patterns out to a text editor just in case they didn’t really save.

Last thought, but I think we can rule this out: I think you confirmed you’re NOT using the mysterious fairy lights that seem to have some sort of field-programmable address setting ability, right? I wondered if you cut these off a crappy controller and they actually have some weird magic sequence you accidentally hit with PB.

There’s not a great confirmation in the IDE that a pattern has successfully saved. In addition, rarely I’ll find I’m in a state where previews will not generate, and so you can’t actually hit save. It’s now become almost muscle memory that after a lot of work, I copy patterns out to a text editor just in case they didn’t really save.

There’s not a great confirmation in the IDE that a pattern has successfully saved. In addition, rarely I’ll find I’m in a state where previews will not generate, and so you can’t actually hit save. It’s now become almost muscle memory that after a lot of work, I copy patterns out to a text editor just in case they didn’t really save.

I believe that must be what happened, since I was actively messing with code to see what happens… finding it both instructive and super-enjoyable. And, I was dealing with a weak Wi-Fi signal, that worked pretty much reliably for my PC but not for the PB. Now I have a really good signal booster installed in the shop. It works great! At the time of code disappearance it sure weirded me out, tho!

The fire… I just… I just wish I was there to bear witness.

I wish I had it on video. It was a mini-Fourth of July. Fireworks. Arcing internal to the px then spitting out burning plastic and flame. Memorable for sure. Ooo and ahhhh, but damn, there goes another string!

So, there I am working with patterns, editing them on the fly. and things go wonky, like some hand reached into the code and started f’ing with it. Out of my control. This you may already know. Colors went funny, pattern no longer from the source code… then pixels burn toward high intensity, toward white, then burn out. Like some "hand-o-god’ was messing with the controls and hashing my code, burning my strings. It seemed as if the whole string network was getting charged up with power. Freaky for sure.
Anyway, That along with my recent computer crash… made me a whole heaping bit o paranoid about my efforts and their integrity in the work space. And, admittedly that concern was very likely super irrational.

Point is, per the above, the more transparent, reliable and fail safe this system is the better. And for that I am most thankful.

Well, that was quite the diatribe above so here is a more reasoned look at the issues of led burnout and code loss/disruption -

I’m thinking of this may have at least some small bearing on @UnstoppableDrew’s observed weirdness outlined in his post -
https://forum.electromage.com/t/drops-off-wifi-cant-connect-reboot-works/1344

Not being too familiar with the nanoleaf but having watched their production video I see they are quite plastic-y.

Nanoleaf Behind the Scenes 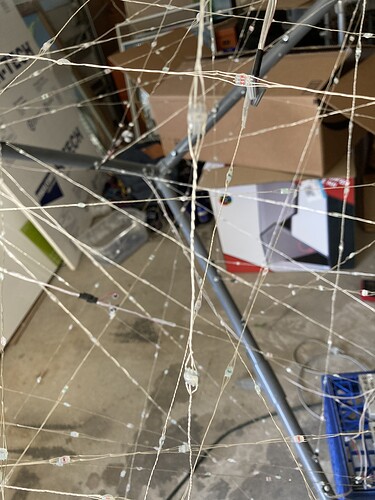