Around the end of last year while still waiting for my pb3’s I built the DIY nanoleaf project on Thingiverse using the WeMos D1 as the MCU. And while it worked and looked cool, changing patterns was a pain because it needed a recompile, etc. At least I got OTA update to work so I didn’t have to pull it off the wall. BUT, after a few months, it stopped progressing past a certain LED in the 5th frame. I thought the pixel had gone bad which would require surgery, so I unplugged it and left it for another day. I had always planned on using the pb when it came, and today I finally got around to pulling it down and cracking it open. I removed the WeMos and the level shifter, and just temporarily spliced in the pb3 standard and much to my surprise, the whole string works fine. Sweet! All I need to do now is make a fresh set of leads to go from the pb pico to the head of the strip, hot glue it into the compartment, and I’m done. The other concern I had was wifi strength, as I’m on the 3rd floor of a Victorian house which is a death trap for radio waves, but I have since replaced my router with a mesh setup, and one of the APs is in the room with the panels, so that’s not an issue either. 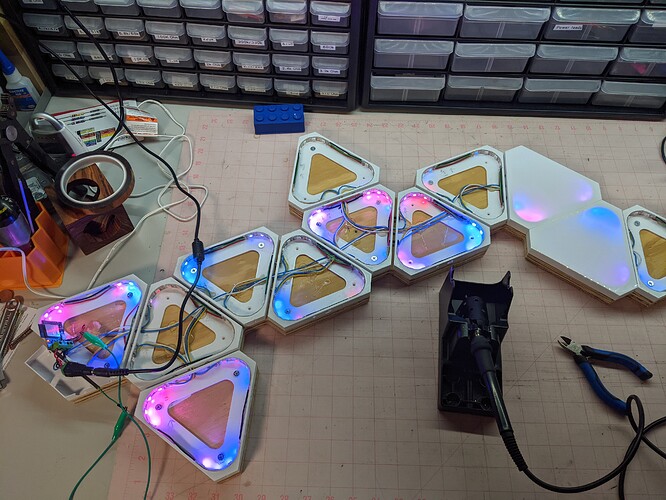 Nice!! What an amazing success story. Thanks for sharing. Let us know if we can help you code patterns for this.

I was wondering if there are any patterns that are specifically geared towards the nanoleaf style implementation. I haven’t started messing with the programming yet beyond a cursory look at some of the examples.

There aren’t BUT it would be a simple hack to make some 1D patterns work “per nano cell” rather than per pixel, and also to map 2D.

Take a photo and use Ben’s mapping tool to generate the map.

That tool is brilliant. I may try again to get the picture as straight as possible and click as accurately as I can, but this is good enough to get started with. 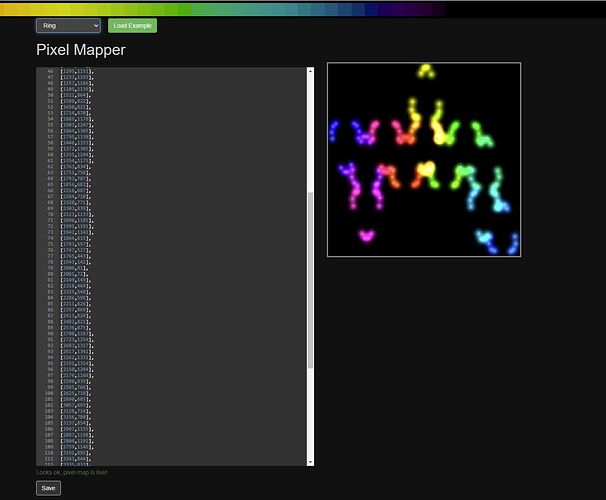