I’ve never been happy with the look of LED previews. Sure, they show you which pixels will light up, in which approximate colors, but they’re totally missing the pop – the vibrant feel of an LED display. So I’ve had an “improvement” project in the works for a while. Here’s a first look at what’s going in the next build of Pixel Teleporter, which should be out around the beginning of November.

This is the “Line Dancer” pattern from my repo, running on a PB3, feeding into PixelTeleporter. The MP4 was made using Processing’s built-in movie maker. No actual LEDs or cameras were harmed (or used) in the making of this film. It doesn’t even require a particularly powerful computer – this demo runs 60fps on my venerable i7-2600k w/NVIDIA GTX 1080. 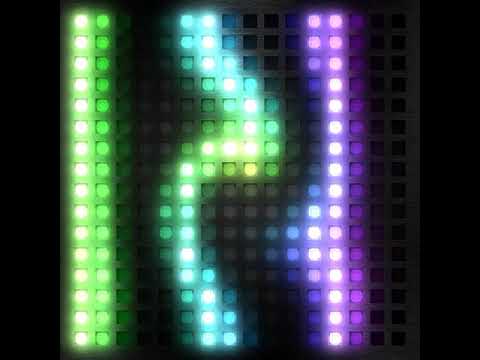 That’s pretty awesome! It looks like 3 glows, with mask for the inside?

To be clear, Pixelblaze’s in-browser live previews are fantastically useful, and wouldn’t really benefit from this sort of treatment. They’re a fast visual index for finding and selecting a pattern on your Pixelblaze.

What I’m working on is a better way to build a visual catalog for a pattern library. The 2D previews I’ve seen on the web so far really don’t do justice to the patterns they’re representing.

Anyway, here’s how it works:

There are two layers:

Individual LEDs are “lit” with a large precalculated brightness map, which is built at startup time, then scaled and applied per-LED. The map includes the very bright LED center, interaction with the geometry, and light falloff across the scene.

The whole scene is lit with a very dim white directional light, shining from the viewer location into the scene. This provides just enough light that it sets off the “bloom” effect – crazy bright white specular highlights, really – when the light contribution from the brightness map is high.

(The recessed look in the video is a mistake – I set the LED geometry slightly inside the background instead of atop it – but it looked good enough that I’m keeping it as an option.)

But given how I almost always record a short video and link it in the code for anything 2D, I almost wonder if a shorter, more useful path would be to just have an optional field on the pattern upload for a video demo. If it’s not provided, we can use the 1D preview, or any 2D previews in the future. Granted you have hard decisions about accepting YouTube links (like Discourse), preview size, transcoding, storage…

But I’m curious to see what my latest cool pattern looks like with this neat tool.

Maybe if @zranger1 makes this all p5js friendly, we could render LEDs in the browser.

Way back in the back of my mind, I’m thinking about a stand-alone java app that could potentially be run on the server backend to extract EPE preview data and make a detailed preview GIF. If that works, instead of a random link, we could just have people check a 1D/2D box and maybe specify the optmal dimensions. They can still mess up, but nobody’s going to have to watch Rick Astley for a preview.

Here’s what I’ve got along those lines so far:

If things continue to go well, I’ll have beta code out for the fearless to try later this week.

Ok, I’ve just put the demo out as a beta release on github. The direct link is below - v1.1.9995b. To use it, download PixelTeleporter.zip and copy the contents to your Processing libraries as usual (instructions are in the README.md in the PixelTeleporter repo if you haven’t done it before.) Or…

If you’ve updated to Processing 4, you can use the new easy installer. Just download PixelTeleporter.pdex and drop it on Processing (or double click it). You’ll be asked if you want to install “PixelTeleporter”. Respond “Yes!” and you’re done.

You can try out the new renderer from the “LEDRenderTest” example. It’s set up for a 16x16 matrix, but can easily be changed to other sizes. In addition to the normal PixelTeleporter UI, you can set the level of camera oversaturation - the glowing, blown out look you see in many LED videos, by pressing the 0 (off), 1,2,3,4 keys.

I’d appreciate any feedback, especially on performance, as I’m asking quite a lot more of both CPU and GPU…

As this is a prerelease, there are known bugs. Here they are:

(Snake 2D running on a PB3, as captured by the Windows Game Bar. No editing, no post-processing.) 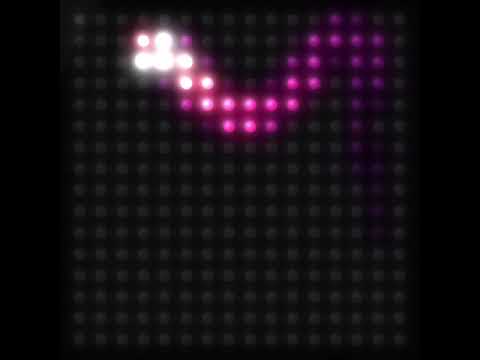 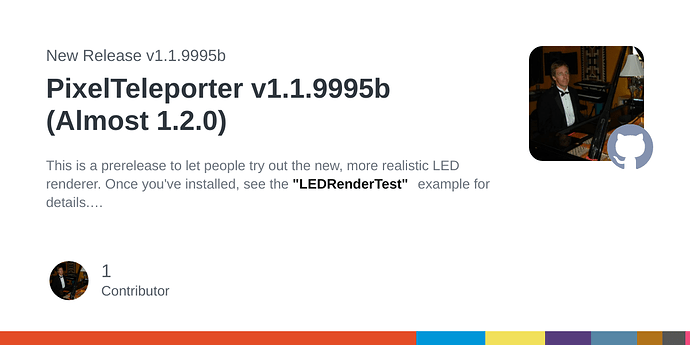 This is a prerelease to let people try out the new, more realistic LED renderer. Once you've installed, see the "LEDRenderTest" example for details. Also, includes easy install for Processing 4 - ...

Pixel Teleporter HD progress report: Almost done. Just fine tuning for robustness and working to push as much work as possible out to the GPU.

Here are a few relaxing minutes of the new Pixel Teleporter simulating the awesome Evil Genius Labs Fibonacci 256 board. It’s being driven live by a Pixelblaze3 using the mapping function developed in this thread. A video of an actual board from the Evil Genius website is shown at right for comparison. 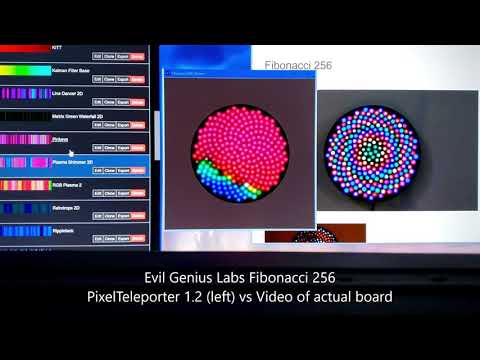 That is seriously amazing work! I need to find some time to try this out.

Wow! amazing stuff. I’ve never seen a lot of those patterns you have on the drop-down list in the video? Any way you can upload a couple of them to the pattern page?
Thanks Much
Twilight

Wow! amazing stuff. I’ve never seen a lot of those patterns you have on the drop-down list in the video? Any way you can upload a couple of them to the pattern page?

browsing the OP’s github account, he has a patterns repo found here: 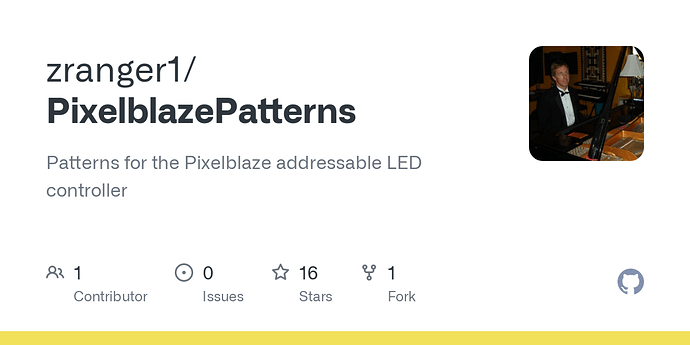 He does, but he’s also posted some here on the forum and I suspect some are “still in progress”

@zranger1 is a true PB conjurer.

@twilight, I’ll post these to the library as I get them polished – nice controls, the code decently commented, etc.

Meanwhile, most of the patterns in the video are in the repo that @timster mentioned above – either in the “2D and 3D” folder (for finished patterns) or the “Experimental” folder (things that work, but need cleanup before release). Please take a look, play with them and make suggestions.

Some of my recent favorites are:

and if you want something brand new, try the two negative space patterns (black designs against a lit background), darkstar2d and seastar2D in the Experimental folder. I’m still working on improving these, but they’re already really different and interesting.

Thanks you guys are awesome!