So excited for this. Thanks a lot for figuring out some of the challenges around it.

This is going to be beautiful!

Can’t tell from the wording whether this message is related to the save operation, or if it is referring to preview frames or peer discovery traffic. This particular PB is in a noisy wifi environment with lots of other electronics nearby, but I hadn’t seen this message with previous firmware versions.

Thank you for the super detailed feedback!

Do you mean it went back to setup mode?

Your filesystem is having none of that. It looks very full and is unable to write much of anything. How much free space is reported? It seems to be trying very hard to GC and reclaim free space but having no luck. I would free up some space, running this low can cause issues saving the config! It might also be corrupted.

If you are feeling lucky, a possibly dangerous way to reset many of the pages/sectors would be to use the new backup and restore feature. It won’t reformat the FS, but it will delete pretty much everything except the app pages and let the free space GC clean things up.

The risk is that if your FS is corrupted the restore might have the same kind of write trouble and not get everything back in place.

Your WiFi can’t keep up sending live preview pixels. The log message is new, and the new preview pixel size is going to use more bandwidth, but this would happen in older versions as well.

Hmm… Maybe the number of preview pixels should be a setting, so you can drop it down to save bandwidth and reduce preview storage… The 2d/3d previews don’t look too good when there’s a lot of missing pixels.

Pattern previews in editor are great, but way too dim – they’re dimmer than the actual LEDs! Looks like they’re scaled down based on both the “max brightness” config setting and the ‘brightness’ UI slider.

Yes, thats still the same. I still plan on changing that at some point. It might be the softness of the LED glow. Try experimenting with some of the preview rendering settings. For example in a browser console (for 2D): 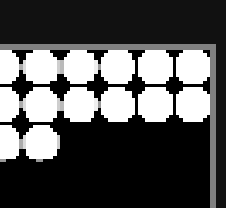 There’s also a gamma correction happening to reproduce the linear LED output. Define this function and use it to adjust, defaults to 1/2.2.

I rolled this one around for a while. Counterpoint, hsvPicker, rgbPicker. In the end I went with that for understandability / readability.

Two way controls (that is code changing the control value) isn’t in there yet.

New UI outputs: gauge shows full-scale but loses its ‘%’ label if values are greater than 1; if value is negative, the gauge continues to show the previous valid value.

Hmm. A while back I made is so that if you define a variable/function (any identifier) that has the same name as a built-in it will prefer your definition of it. Maybe implicit globals could leak through. This fix specifically is so you can do this:

Which would cause an error unless you added the var keyword to declare ‘foo’.

Do you mean it went back to setup mode?

I didn’t try to reconfigure the access point; I just saw it disappear from my wifi network, searched for and found it responding to 192.168.4.1, and then power-cycled before doing any further debugging. When it rebooted, it reassociated with the previous wifi network.

How much free space is reported?

disappear from my wifi network, searched for and found it responding to 192.168.4.1

If it was responding at address 192.168.4.1 then you must have been connected to the Pixelblaze access point / network in either AP or setup mode.

I wonder if the fail-safe tripped somehow, that could put it back in setup mode.

By free space, I mean the flash storage used to save patterns. This can be seen on the pattern list page here:

The mem in the UI header is the array element RAM available and doesn’t impact saving or previews.

But it fails on patterns that are much smaller than that, like ‘DAFT PUNK’ (19KB of text, 25KB as an EPE). The largest pattern I’ve managed to save was 18KB as an EPE.

I hadn’t even thought of that! I tested it, and technically you can do that now but I have such a fine step in place that it would take forever to move from end to end. I think a step of 1/200th still gives fine control and can be moved with the keyboard.

love all this thank you soo much. I am especially excited about the UI/IO updates and Preview fixes.

Fixed a few minor things, and added some low power modes! This can get tricky, I’d love some UX feedback on how that works.

With wifi off and the CPU at 80MHz, both the Pico and Standard draw about 32-34mA. Once you enable WiFi it stays, though I’m looking at a way to turn it back off based on a button or idle timer or something.

I still have some work to fix Safari. Let me know if you see anything odd!

I’ll try and check it out early this week.

Installed fine. I’ll mess with it and report back.

I’m loving the live preview! To make my 8x32 matrix preview with the correct aspect ratio, I did this:

Let me know if you see anything odd!

Looks good here, but you might want to have a look at the backend website for http://discover.hencke.net/update. With 3.22 installed, it’s offering an upgrade which turns out to be 3.20.

Looks good here, but you might want to have a look at the backend website for http://discover.hencke.net/update. With 3.22 installed, it’s offering an upgrade which turns out to be 3.20.

Ha! I accidentally reverted one of mine that way!

Hi @wizard - I’d be happy to give the beta a try (I have been a seasoned tester for a UK brand of internet connected audio devices) but I am unclear on a couple of points. How does one install the beta? What are the possibilities of bricking and what are the recovery options in such a case? I want to help, but I also don’t want to mess up. Thanks.

Hi @GodmanchesterGoblin ,
Update files can be applied manually by using the /recovery.html tool on a Pixelblaze, or if that is missing it can be uploaded via the /update built-in page.

The recovery tool is nicer because you can see your update progress even for manual files. For the /update page you just have to wait a few minutes without knowing whats going on.

There may be bugs in this version, probably relatively minor ones, but they might cause some patterns or features to not work.

You can revert to the released version by using the built-in firmware update tool on the settings tab, or by using the ‘/recovery.html’ tool.

It is unlikely to completely brick your PB.

The most common issue happens if there is a problem updating the main web app file, usually when the system is low on storage. 500-600K seems like a safe bet. Less than 300k seems to frequently cause issues. If this happens, the recovery tool can still be used to attempt to repair or revert to the release version.

There is a different update file for each kind of PB v3. One for Standard with the pb32 in it’s name, and one for the Pico with pico32 in the name. Uploading the wrong file won’t cause anything bad to happen, it just won’t update.

@wizard - that’s really helpful info. Many thanks for taking the time to explain. I shall certainly give this a go. I have a standard PB v3 wired up to a test panel that I can use for this (350 LEDs mapped in 35 rows to look like a 2D Christmas tree).

Bump. If you’ve given this a spin, I’d love to hear feedback, even if it’s just “yeah, no problems.”

And thank you to the folks that have commented already! Appreciate it!