So I hooked up a few of the new Hex panels I got to a new Atom lite (in the same shipment), and flashed it with the latest WLED. And I was reminded of a few things:

That said, I’d like to propose a group effort, open to anyone who wants to help: 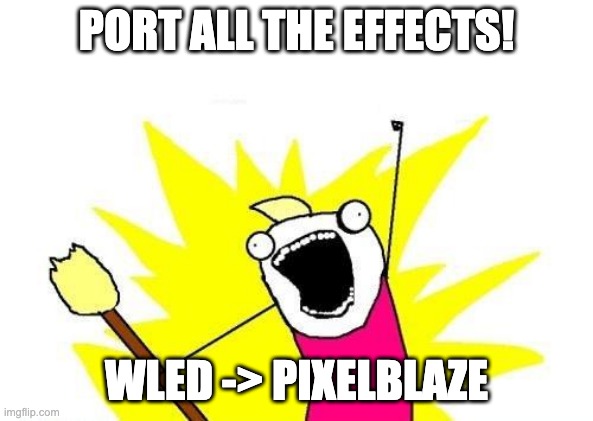 Port ALL the things!

The “re-org” of the pattern library into more of a github style is coming (soon?)
WLED bundles all of it’s built-in effects into just a file or two. Split that into concrete and fairly small tasks, we could build PB equivs (or better) for each one.

This could be a good way to folks learning to code in PB to feel really accomplished and contribute back. Some of those patterns are pretty easy to do in PB, perhaps easier than in WLED.

That’s a great idea, and as a starting point can I suggest that it would be an idea to put together a compatibility library? IIRC, WLED stuff is written for FastLED so some concepts are completely orthogonal to the PB way and other things can be fairly easily ported as library-able functions.

What I’m thinking is that we’d probably want a skeleton program that defines a FastLED-like environment with pixel framebuffers and a standard render() function to output them, and as as many compatibility functions as we can provide to make the process of “porting” mostly a copy-and-paste into the preRender() function and some minor syntax fixups.

I’ve already started playing with a couple of FastLED patterns so I made my own FastLED-like skeleton:

and a PB function to mimic the “EVERY_N_MILLISECONDS” macro:

Then to use it:

Easy patterns like chasers will be simple enough to port, but a lot of the nicest patterns depend on things like palettes, blending, blurring and fading functions that we don’t have yet.

And at the moment I’m struggling with the difference in floating point representations and what FastLED functions do internally with them; for instance, the pattern code may calculate a 16.16 number which it then passes to “beatsin88” which expects an 8.8 number, so the C compiler silently does a downcast and/or a truncation, and then the parameters to beatsin88 are treated as an integer if less than 256 but as a 16.16 fixed-point number if greater. With all the side-effects it can be very difficult to tell by eye what some numbers used as parameters to FastLED functions are really doing; sometimes it’s necessary to single-step through in a debugger to see how it winds up.

Still, I think it would be a very worthwhile exercise, and when we’ve squeezed all the goodness we can out of the WLED pattern library we can move on to the other FastLED-based engines (I’ve seen quite a few patterns I like in the SoulMate library).

while the idea of a FastLED compatibility library is a good idea, it’s such a radically different method of programming LEDs, that doing simple tasks (like most of the patterns in WLED) becomes more about emulating WLED than actually doing the pattern.

So let’s divide this in two pieces:

and take a simple case: blink() is used for a few patterns.

Porting this exactly, including segmenting code (which is used a lot in the patterns) seems pointless IF we can port the functionality.

We have ‘segmenting’ code now, the Multisegment pattern and Multimap multi-pattern will do this in either 1d or 2d, and just need a code fragment of a pattern to be installed into them.

Palette aside, doing a blink() is pretty easy.

I’m all in favor of doing this, but don’t want it in the way of the much simpler task of just ensuring that Pattern X from WLED has a PB equiv. In fact, having a PB equiv rather than a pure port can help teach people the PB way to write things.

I hear what you’re saying, but a quick look through the PB pattern library shows that a lot of the non-chaser patterns – most of the Cylon/KITT variants, Snake, Doom Fire and others – calculate into pixel buffers and then output them at render time. If we port most of the FastLED helper functions for dealing with buffers, then those WLED patterns can work on PB with a minimum of fuss (which is one consideration as a training exercise). Those who want to code golf can continue rewriting the patterns to try to eliminate the pixel buffers, but in many cases it won’t be possible.

Don’t get me wrong, I love the PB way of doing things and I’ve never seen better for getting something amazing up and running with a minimum of code, but there are times when you need a little more access to the render pipeline…

I don’t have a problem with a pixel buffer, in fact, I’m working on code for one now…

but the KITT variants are a good example of why I don’t want to just port it. We have not only an array method of doing it (Classic KITT by Ben), but we have new variants that do it on matrixes, using waves, with no array required.

I think we agree, making it easier to do FastLED style patterns is a good thing. I’m just saying, don’t port it wholesale, pick and choose.